For more than 35 years, Western sawmills operating in the 12 Western states have provided WWPA with lumber sales invoice information. Each year WWPA processes invoices for approximately 9 billion board feet of lumber shipments. Analysis of these invoices enables the Association to publish the Lumber Price Indexes and Western Price Summary. These reports are used by government agencies and private companies to adjust timber prices and analyze related markets.

Western lumber manufacturers are asked to send “arms length” invoice data to WWPA. Only wholesale transactions are used. Intra-company transfers, mill use and employee sales are not included in price report calculations. Freight charges are backed out from delivered prices to ensure that all prices reported are F.O.B. mill prices. Special charges (paper wrap charge, for example) are excluded from the price, as are discounts and commissions.

All price data compiled by WWPA is kept confidential. Participating companies receive free copies of the Index and Price Summary for their region.

Each month WWPA publishes Lumber Price Indexes for the Coast and Inland regions. Each Index is computed by applying that month’s grade price averages by grade and species to grade group percentages determined by an Index Log, which is a hypothetical recovery log that reflects the average percentage of grades recovered by Western sawmills for that Index species or species group.

WWPA revises the Index Logs for each species or species group at least every five years based on extensive surveys of sawmills, coupled with analysis of invoices collected by WWPA.

The Index Log provides a consistent weighting of grade prices. If grade prices were not weighted by an Index Log, the Index price would reflect changes in lumber shipment levels as much as price changes.

For example, if increased volumes of low-grade Douglas Fir dimension shipments were recorded and compared to the previous month without the use of an Index Log, the Douglas Fir Index price would likely decline, even if actual prices remained stable.

Lumber manufacturers should not attempt to gauge performance based on WWPA’s Price Indexes. The Index is not intended to represent expected realization for a specific sawmill or timber sale. It indicates price trends for a region-wide “average” log of that species.

Although Index prices are based on invoice dates (for example, the July Index is based on July invoices), an individual sawmill’s realization one month to the next will likely differ from the change in an Index over the same period. This happens because that mill will probably not experience the same static grade recovery as shown in the Index Log for that species.

In connection with use of Indexes in appraisals or timber price adjustments, it is not the level of the Index, but rather the trend or difference compared to a previous period that is used.

For example: Company A buys a tract of mixed species timber from Company B, paying 50 percent at the time of purchase, with the balance to be paid by the end of one year. The companies agree to revise the final price at the time of harvest (or one year later, whichever came first) based on changes to WWPA’s White Woods Index.

At the time of sale, the Index is $329.56. One year later the White Woods Index is $267.44, resulting in a downward price adjustment of $62.12 per thousand board feet, Scribner, or 18.85 percent, depending on how the contract was structured.

The reports are available by e-mail. To order WWPA Lumber Price Indices and other statistical reports, visit the WWPA Online Store

To better reflect the product and grade mix coming from the current log supply, WWPA changed its Lumber Price Indexes starting in January 2015.

WWPA Coast and Inland Lumber Price Indexes represent weighted price averages for the major Western species. The prices are weighted according to grade recovery percentages of an Index Log, or "typical" log as determined by WWPA mill surveys. Starting in January 2015, the two Indexes will show prices calculated on average lumber grade recoveries for 2012-2013. Previous Index prices were based on Index Logs set using grade recoveries from 2007 and 2008.

What are Lumber Price Indexes?

Each month WWPA publishes Lumber Price Indexes that are used to indicate lumber price changes by species or species group. The Index prices shown are based upon reported lumber prices combined into grade groups, which in turn are multiplied by the fixed percentages as shown in WWPA's Index Logs.

What are Index Logs?

For each species or species group represented in WWPA Lumber Price Indexes there is an Index Log, a hypothetical log containing the average percentage of grades recovered as reported in the latest survey of Western mills. The Index Logs now in use reflect the grade group percentages produced in 2012-2013.

Why did WWPA change the Index Logs?

The Index Logs were updated because:

What kind of revisions were made based on the 2012-13 grade recovery survey?

Lumber grade revisions Generally, a change in index price differential for an individual species is a reflection of change in grade composition of a species’ Index Log. For example, grade recovery analysis of Inland Red Cedar’s 2012-2013 Index Log indicated the species decreased by $56.08. Primarily, this was due to the following reasons: #3 and Better Common decreased from 70 percent in 2007-2008 to 65 percent in 2012-2013; and Selects Shop decreased from 3.6 percent to 1.5 percent. Also, the volume of #5 Common Economy decreased to a point where it could no longer be maintained as a separate category and was combined into the Miscellaneous group.

The $12.52 differential increase for White Woods was largely driven by #3 and Better Common's Index contribution increasing from 8.5 percent in  2007-2008 to 12 percent in 2012-2013. Sugar Pine's $12.79 decrease was a result of a combined 3.9 percent decrease in the contribution for the higher grade categories of Selects and #2Better Shop.

What procedures were used to develop the new Index Logs?

WWPA's Market Services Division contacted all Western mills asking them to supply 2012-13 production by species and grade information for the purpose of producing the new Index Logs. The responses represent approximately 70 percent of total Western production in the Index species or species groups.

How are the new Index Logs implemented?

WWPA released the new Indexes with the January 2015 reports, published in early February. The U.S. Forest Service is using these Index prices for all new timber sales advertised.

Existing contracts are being revised using differentials calculated from a recent 24-month period (January 2012 to December 2013). The reason for the differentials is to reduce the impact of short-term market swings and seasonal biases. The same method was used for the last four Index Log revisions completed by WWPA.

For purposes of the new index, differentials were calculated for the 24-month period extending from January 2012 through December 2013. On a monthly basis, the differential is calculated by:

This value may then be added to the species old index value resulting in a new base index for the species going forward.

The formula for adjusting existing contracts is as follows:

New Base Index = Existing Contract Base plus Differential 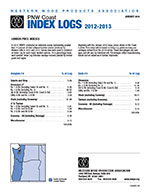 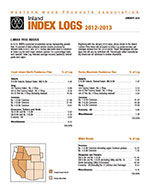